It would be difficult for anyone living, working or passing through Tillydrone, on a regular basis, to have missed a new building which was being built alongside Hayton Road. The Tillydrone Community Campus was built to provide a range of services and facilities for the people of the area. Although it seemed a long time in the making, or should that be building, The Campus reached completion during the school holidays and was officially opened by the Lord Provost, Barney Crockett, on Friday 23rd August 2019.

Our Glee Group / choir, conducted by Mr Dawson, were invited to attend the opening and provide entertainment for the guests and members of the public. We were delighted to accept this invitation and for the group to sing a few songs. 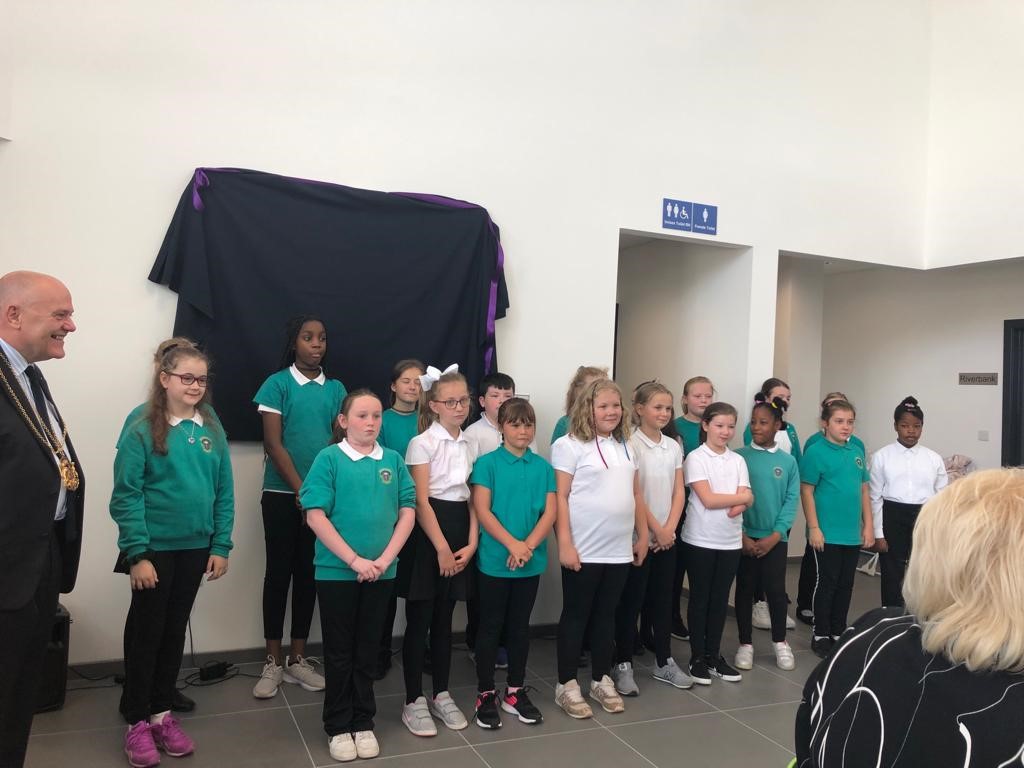 The Lord Provost looks on. 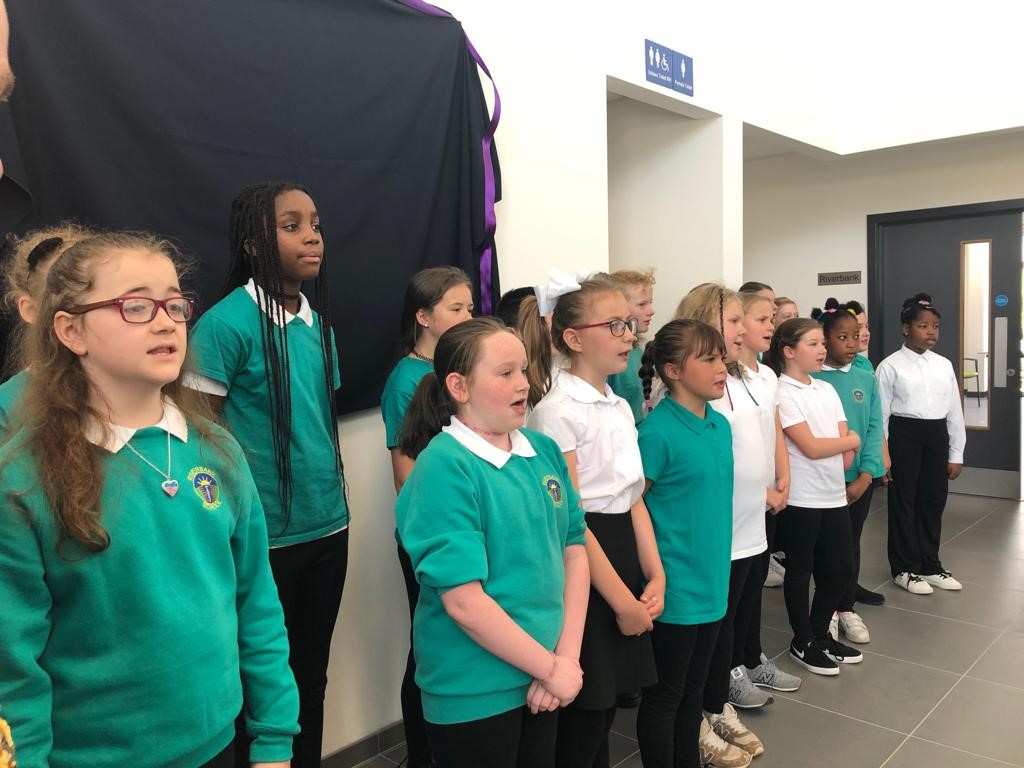 Getting into the swing of things. 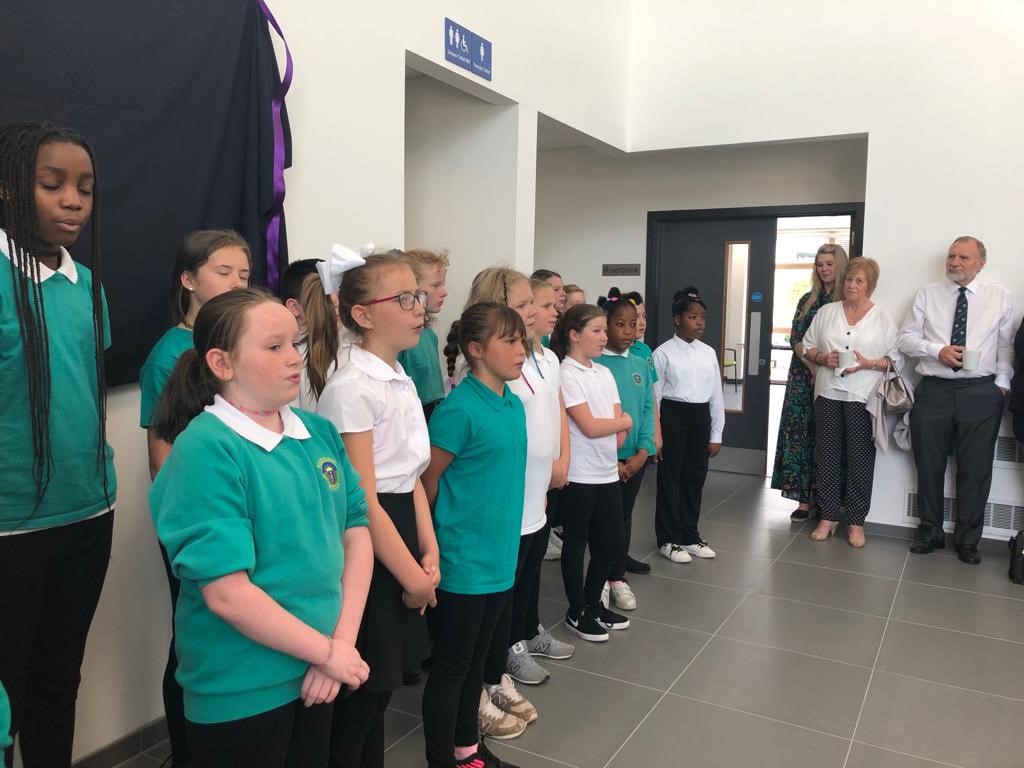 The artists who helped with the mosaic are part of the audience.

Pupils from Mrs Ng’s P7 class of last session had been involved in making a mosaic to be placed on the wall of the new Campus building and it was unveiled by one of our Primary 7 pupils. The curtain was rather uncooperative and required a deal of persuasion to be removed. If you’ve visited The Campus and seen the mosaic then, I am sure you would agree, it is a beautiful and impressive piece of art work.

Colin Fenn and Vera Cordiner of Grampian Youth Art approached the school to ask if they would like to be involved in an art project. Our Depute, Miss Hampton, allocated the project to Mrs Ng’s class and everyone was then introduced to Maggie Patience of Pretty Rubbish Mosaic Art. The project was to produce a mosaic hanging for the new Tillydrone Campus. Maggie spent several weeks producing the materials which would be used in the hanging but the pupils were all to make an individual keepsake which they could take home.The pupils were introduced to the various media they could use as well as the different tools they would need. Tiling and grouting skills had to be learned. The children were fully engaged from start to finish and they were so eager to help that they offered to work through break and lunchtimes. Every child wrote their name on the back of the mosaic so that, even years later, if it was moved people would be aware of who had made this lovely piece of art work! A fantastic opportunity that the children were privileged to take part in and to see their work in display in The Campus is the icing on the cake. 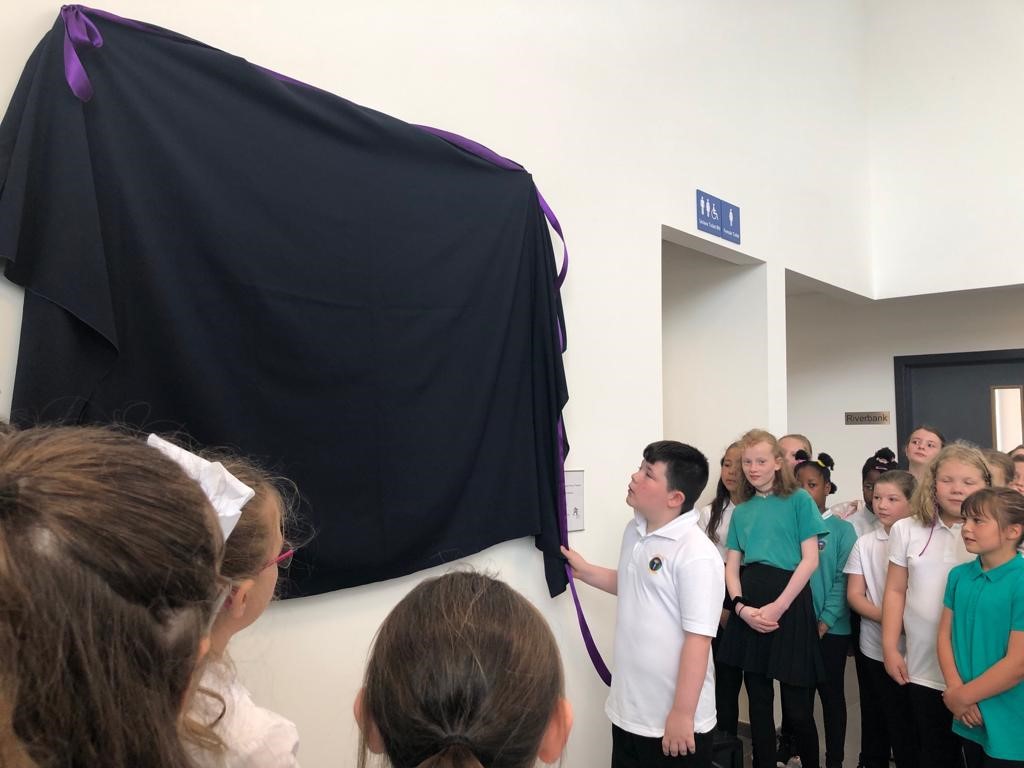 One of our pupils was asked to open the curtain to unveil the mosaic. 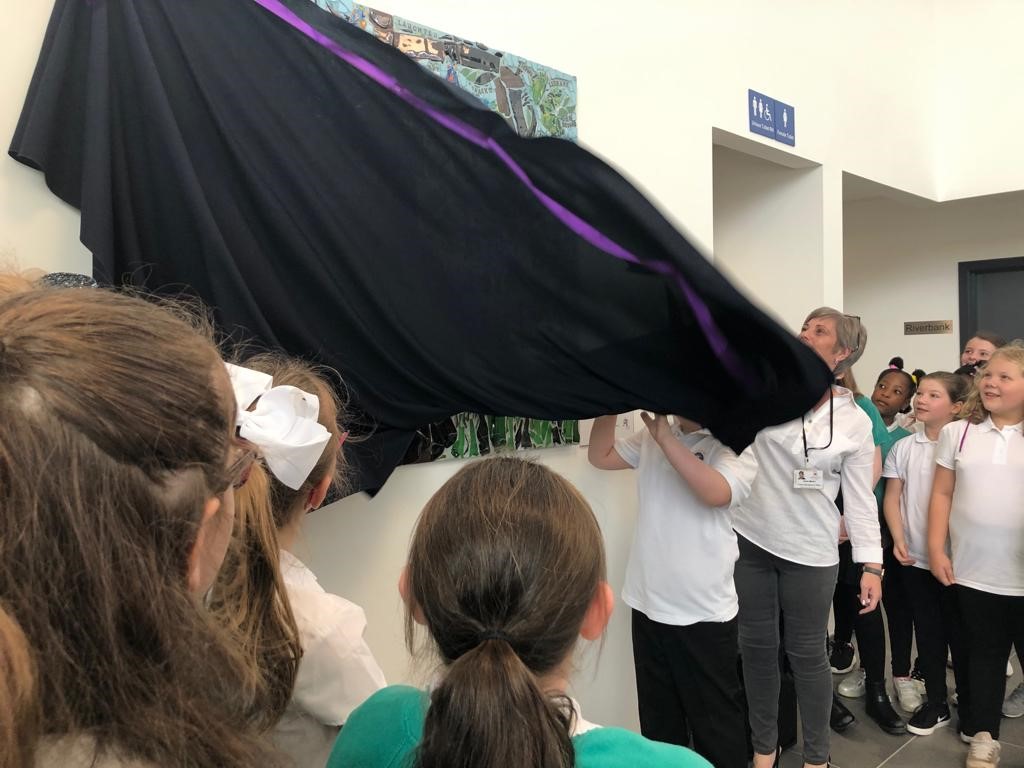 Oops! I don’t think that was meant to happen! 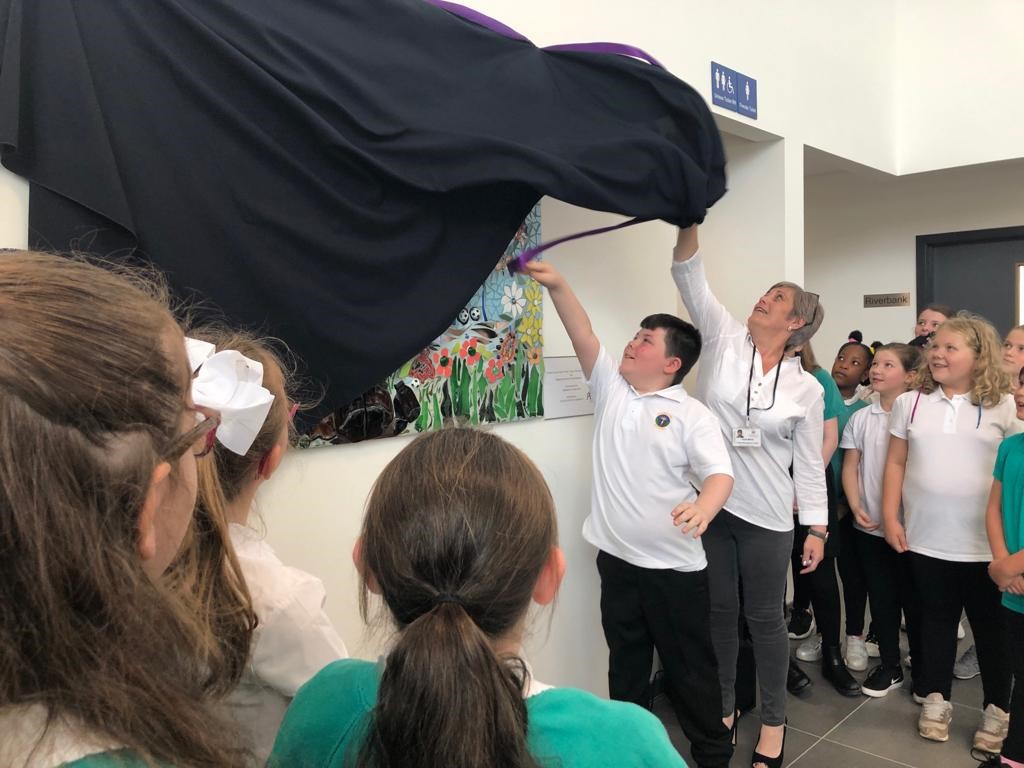 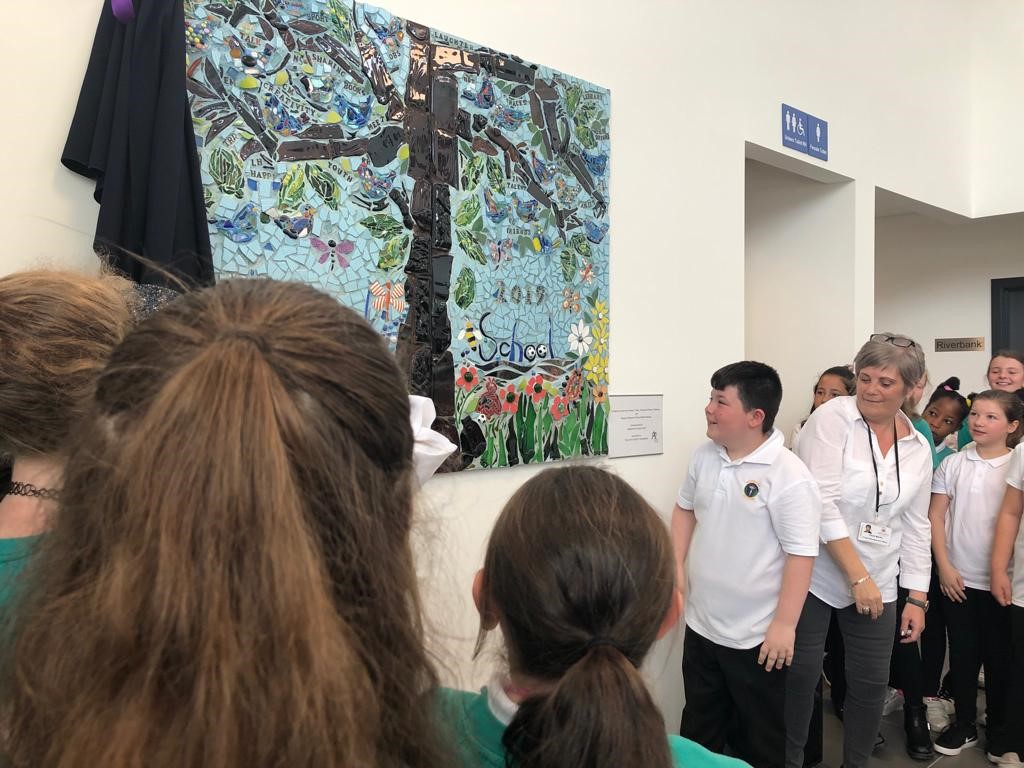 At last! Revealed in all its glory! 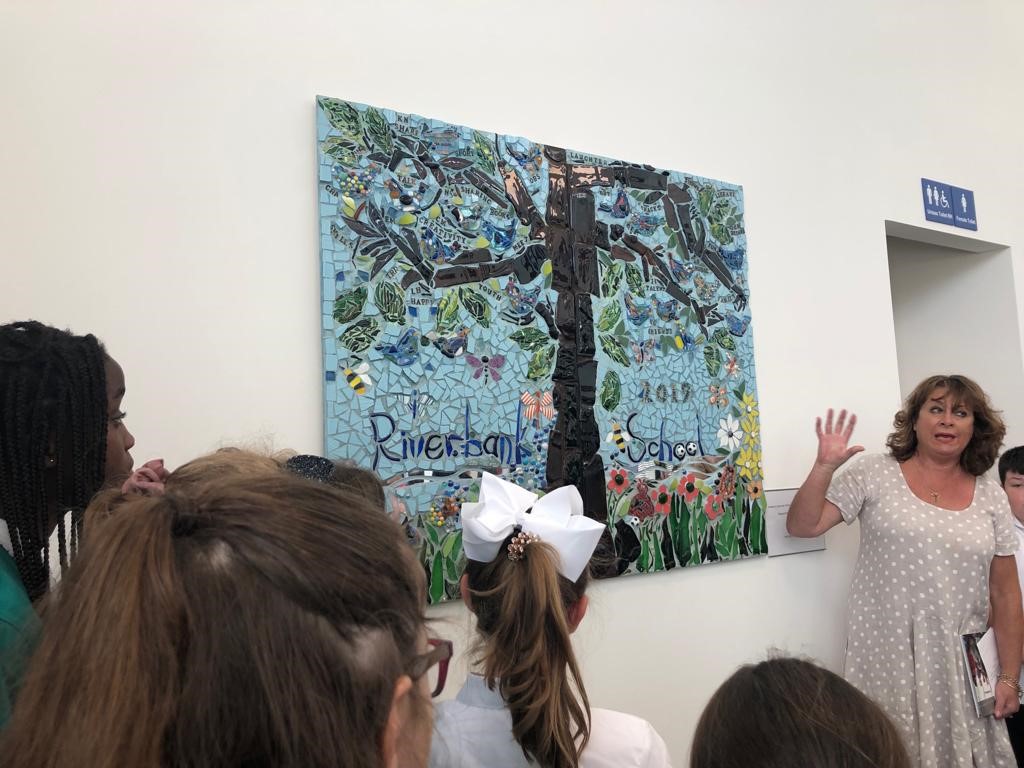 Maggie from Pretty Rubbish Mosaic Art explains how the mosaic was made and the theme behind it. 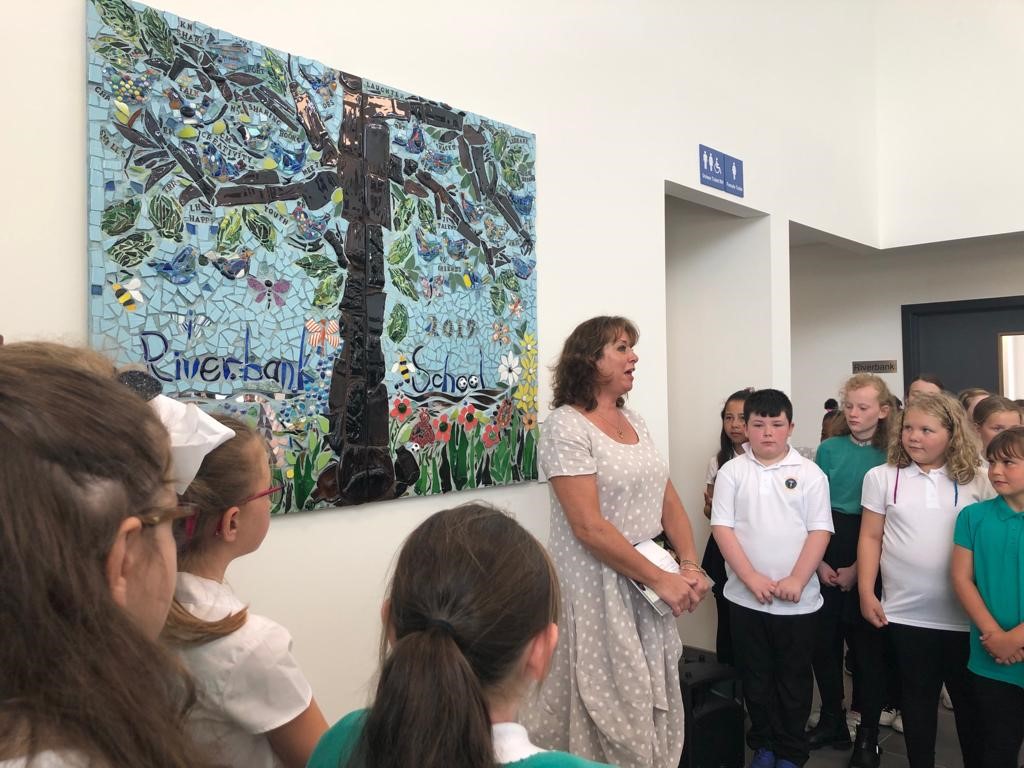 Stand back and be proud! 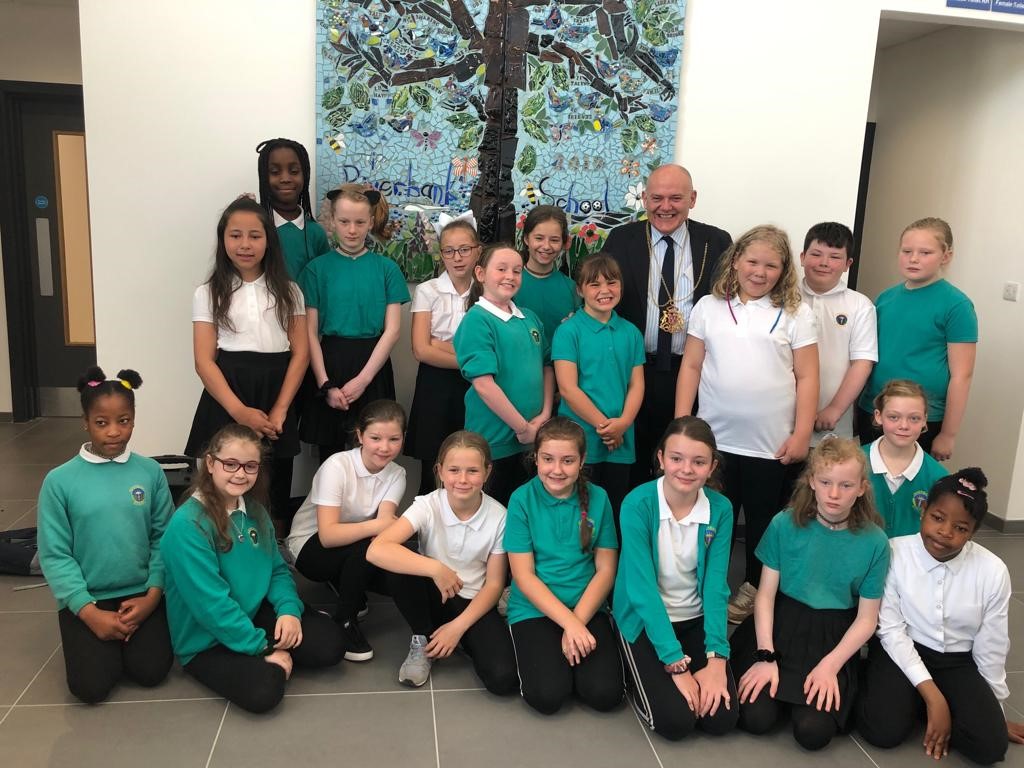 Time for a photo shot with the Lord Provost! Anyone for a selfie! 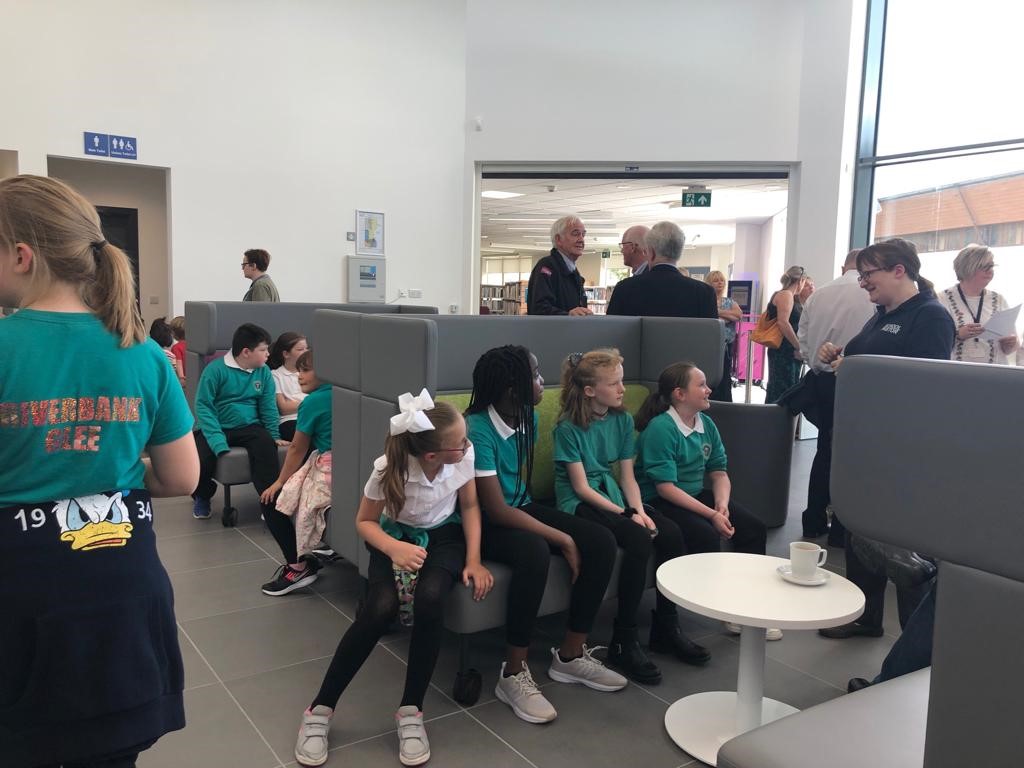 Enjoying hospitality after all the hard work!

The children were also able to tour the new Campus and find out what is available to the community there. They were very excited with what they saw and I’m sure that they will be using this fantastic new facility in the not too distant future. 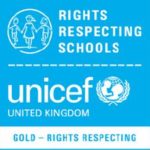 Article 15 – Every child has the right to meet with other children and to join groups and organisations, as long as this does not stop other people from enjoying their rights.

Article 29 – Education must develop every child’s personality, talents and abilities to the full….

A very warm welcome to Riverbank School website. We hope we’ll be able to keep you up-to-date with everything that’s going on at Riverbank. All our school newsletters are available to read online, a calendar of events is displayed and each teacher  can showcase the work their pupils have carried out and everything they’ve been up to on their own pages! We hope you enjoy browsing on our website.

There are no upcoming events at this time.