I’m sure you’ll all be delighted to find out that Tilly the Terrier has been in touch with me, again. He has sent me his latest diary entries and I await his latest photographs. I have placed his diary entries below and will get photos to you as soon as I have them.

Today is our last day in Kamuli.  We will spend most of today travelling by bus to Entebbe where we will spend one night before travelling to Murchison Falls to see some wild animals.

We started the day off by visiting Kamuli Township School to say goodbye to the staff and children. Unfortunately the headteacher was ill with Malaria – Mrs Ironside and I have been taking a tablet everyday to make sure we do not contract Malaria as it can make you very ill.  Malaria is contracted when you get bitten by an infected mosquito.  If you take the tablets you will not get it but if not there is a chance you will.  The headteacher had malaria for the first time a few years ago and once you have had it you are more likely to get it again.  Despite being ill John the headteacher came to school to say goodbye. We were all sad to leave but excited by the prospect of being able help in the future.

We then travelled by bus to Entebbe, this was a very long journey but the travellers sang some songs to relieve the boredom and I howled along with them.

Today we got up at 5.00 to make the long bus journey to Murchison Falls to see all the wild animals.  I could not wait to get there so that I could meet all my wild cousins – like lions and elephants.  Mrs Ironside told me not to be disappointed if I did not see them as they are wild animals and might be busy catching their tea!  I am glad that I don’t have to catch my tea as I have very little legs and cannot run very fast!

When we arrived at Murchison Falls our first task was to rake a boat across the River Nile into the safari park. While we were waiting for the boat I started barking and howling – Mrs Ironside, Miss Arnott and Miss Rowley thought I was unwell, what they didn’t know, at this point, was that I had spotted four elephants, two adults and two babies on the opposite bank of the river.  Once they realised the elephants were there, there was much excitement! They were too far away to photograph but we enjoyed watching them and one even sprayed it’s back with water – I tried to do that,too, as my coat is really warm but ended up soaking Mrs Ironside – she was not impressed!

We took the short boat trip over to the Safari Park and boarded the bus to go see my animal cousins. We were very lucky to see warthogs (Pumba from the Lion King), baboons, African cobs and many Giraffes, but, most excitingly, we saw some lions!  I wanted to howl at them but Mrs Ironside said, “No!”, as they are wild animals and might try to eat me or as she put it, more importantly, they might try to eat her!. I decided not yowl as I didn’t want to be someone’s dinner.

We then travelled to our hotel and, eventually, I had my bone at 8.30 – it was a very long day!

Mrs Ironside and I were woken very abruptly at 1.30 am by an ear splitting crack of lightning – Mrs Ironside woke with a jolt and almost fell out of bed.  We stayed up for over an hour to watch the thunderstorm – it was stunning.

We eventually got up at 5.00 am so that we were able to leave at 6.45am for another Game Drive.  We saw many more animals in the morning but the highlight was seeing the hyena.  It was. Mummy hyena and she had 2 babies.  Mrs Ironside explained that although the hyena looked like it had a smile on its face it was actually quite stressed by us being there as she was worried we might harm her babies.  I gave her a reassuring bark to let her know we were friendly and she seemed much happier.  After lunch we took a boat trip on the Nile to go and see the Murchison Falls.  The boat trip took two hours to get there and one hour to get back.  Mrs Ironside explained that we were going against the current on the way to the Falls and that is why it took longer.  Whilst travelling on the river we were lucky to see a large number of hippos. They are enormous and have the biggest yawn you have ever seen.  We also saw a small crocodile and then we saw Mrs Ironside’s favourite animal (apart from dogs of course), the elephant.  The elephant was on the bank of the river and we got much closer!  They have such big ears – even bigger than mine.  They eat almost all day and drink over 250 litres of water, Mrs Ironside says that’s just like me – cheeky! 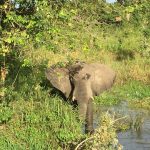 We travelled to a space near the bottom of the falls, you cannot get too close as you would be washed away by the flow of water.  We then travelled back to shore and went by bus back to the hotel.  On our way back Mrs Ironside got very excited and screamed at such a high pitch that only I could hear it.  She had spotted an elephant right on the roadside! (I am beginning to worry that dogs are not her favourite animal). We got so close that I was almost knocked over by the wind when if flapped its ears!

I’m hoping that we will receive some more photos which I can post later on for you. I have asked Tilly to send me some but finding good wifi is difficult in Uganda.

A very warm welcome to Riverbank School website. We hope we’ll be able to keep you up-to-date with everything that’s going on at Riverbank. All our school newsletters are available to read online, a calendar of events is displayed and each teacher  can showcase the work their pupils have carried out and everything they’ve been up to on their own pages! We hope you enjoy browsing on our website.

There are no upcoming events at this time.